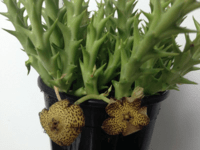 We immediately thought they were some species of Huernia, or possibly Stapelia, but discovered they're actually Caralluma (still a close relative) or synonymously, Orbea. The exact species we're still not clear on–it's labeled as C. caudata var rhodesiaca–but we think the petal shape is wrong for that ID. It could be C. foulcheri-delboschii (syn. C. hexagona) or one of its cultivars, too; either way, it's really cool!

Caralluma is in the Stapeliad group of the Apocynaceae or Dogbane family. It's native to Zimbabwe (formerly Rhodesia, hence the variety note) with distribution into Botswana and Namibia, too.

They're found in granite outcroppings and gravelly nooks and crannies, where drainage is excellent and the soil stays dry. You'll want to mimic those conditions at home if you get one–and they're not hardy here, so a gravelly potting soil with expanded shale and some sand mixed in will be good.

The small, fleshy flowers are in shades of waxy yellow with specks and spots of brownish burgundy, and they have fine, frilly hairs around the edges of the petals. They also stink of rotting flesh. Yuck! Why, you ask? Like the Stapelia cousins, they're pollinated by flies–so they make themselves as attractive as possible by looking and smelling like something dead. They deceit is so successful that flies often lay their eggs on them.

Here's a video of a Stapelia gigantea in bloom attracting quite a few flies. In the meantime, come grab one of these Caralluma before they're gone!

Get Your Garden Ready to Beat the Heat

As the calendar turns to spring, experienced gardeners know that those 90 and 100-degree days…