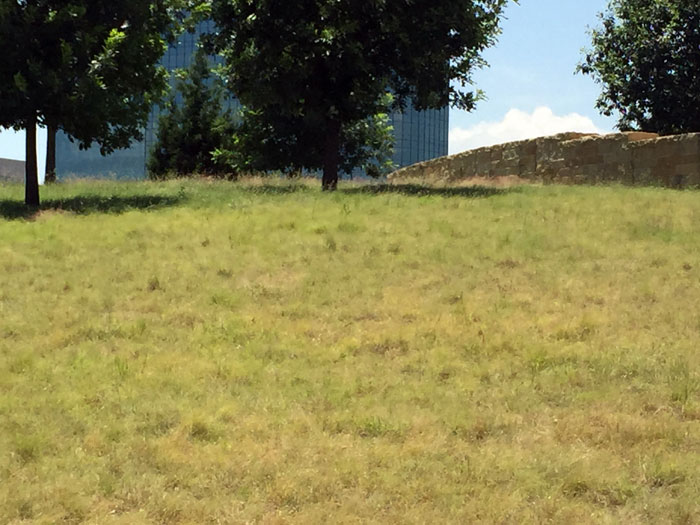 A lot of time and money is spent mowing, watering, fertilizing and spraying non-native lawns, and with our tough summer dry spells and increasing watering restrictions, homeowners are having trouble keeping up. According to a recent study, up to 60% of outside water usage—approximately 7 billion gallons—was used to water residential lawns. Three million tons of fertilizer was put on those lawns as well as tons of pesticides.

Interested in an alternative? Short, native bunch grasses (Buffalograss, Blue Grama and Curly Mesquite) can be combined to create a lawn that, once established, will thrive on as little as 5”-12” of rain per year.  One of our favorite Texas seed suppliers, Native American Seed, has developed such a mixture that they call ‘Thunder Turf’.

Thunder Turf creates a low-growing mat of grasses that you’ll only need to mow in early spring—just once per year. It will naturally go dormant in the summer and green up again when fall rains come.  It requires no fertilization whatsoever, and actually thrives on neglect. NHG carries this seed mix in several sizes to suit a variety of turf conversion projects.

Pictured above is the landscape of the George W Bush Presidential library, where this grass mixture was used right here in Dallas—and as you can see, it’s thriving!  If you’re interested in transforming your lawn, come in and speak to a garden advisor to get started.

As we move from spring into the heat of summer, our early-season plantings and roadside…

When should I fertilize my lawn in Dallas, TX?

Can I jump start my spring lawn by fertilizing? It's tempting to think that applying…

How to Grow Milkweed