The fences and walls that define our outdoor spaces offer a virtually blank canvas upon which climbing plants can provide the perfect focal point–but they’re often overlooked. Particularly challenging is finding a well-behaved vine that can offer dazzling blooms in partial shade.

There are a variety of clematis widely grown and available commercially, and for experienced gardeners undaunted by a higher investment of TLC, an even wider assortment of varieties can be purchased “bare root.” These are dormant or partially dormant rooted crowns, typically packed in peat or sawdust, ready to grow out a bit before transplanting. Among the different types, cultivation and performance vary widely.

Here are some featured kinds that we love at NHG:

Evergreen Clematis, Clematis armandii, is a hardy species native to inland China. Climbing by tendrils covered in glossy green foliage, it grows to about 15′ by same and appreciates a trellis or other support to climb on. In late winter to early spring, it produces masses of pendulous, sweetly-scented white flowers that are a magnet for pollinators. It’s hardy in our area and evergreen to about 15 degrees F., making it an excellent feature plant for roomier garden spots with full sun until early afternoon–late afternoon sun can burn its foliage in the hottest part of our summers. 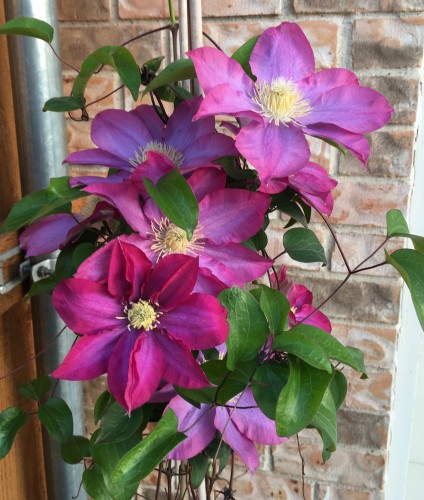 Large-flowered Clematis are frequently called ‘the queen of the flowering vines.’ Hybrids of the beloved Clematis jackmanii and others, they have the showiest, most colorful flowers in a variety of shapes and colors. This profuse bloomer will best appreciate a location where its roots are shaded all day and the blooming vine can grow up into the sun. They have a tendency to surprise gardeners with their ability to appear dead in winter dormancy only to burst forth with vigorous growth in spring.

Sweet Autumn Clematis, Clematis terniflora, is the most robust of them all. It’s a vigorous grower that will smother an arbor in a single season, producing mounds of foliage followed by an avalanche of sweetly-scented, tiny  star-like flowers in clusters in late summer into fall. Pollinators love it, and in full bloom, it’s truly a spectacle. Plant it in full to partial sun in a location that gets ample moisture, although once established, it’s surprisingly drought-tolerant. Even better, it’s evergreen to about 20 degrees F. 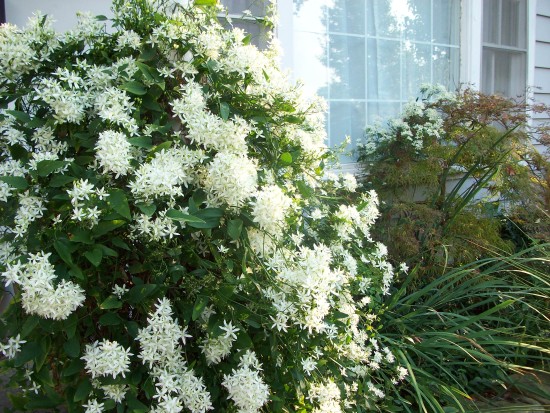 We’d be remiss without mentioning Texas’s native clematis species, of which there are two: C. pitcheri, or the purple Pitcher Clematis, and C. texensis, also called Scarlet Leatherflower. Both of these are fairly unusual to find in commercial cultivation; unfortunately, they’re far more delicate growers than their cousins. In their native environment, they’re typically found in dappled woodlands and along the edges of prairies and scrub land, frequently in surprisingly poor soils. They can be propagated by seed collected in the wild, or sometimes, can be found at native plant sales around the state. Every once in a while, we’re able to find one or both of them in limited supply–but it’s been a number of years since we had a source.

Clematis selections at NHG peak around this time of year

Most varieties are actively growing and either blooming or preparing to bloom. Plan to stop in soon at North Haven Gardens to find the perfect feature vine to crown your garden space!

As we move from spring into the heat of summer, our early-season plantings and roadside…

Growing Your Own: Vegetables in Raised Garden Beds

Imagine a dinner table laden with vegetables grown in your own garden—pretty spectacular, right? Nothing…