All cacti are succulents, but not all succulents are cacti. While both have specially evolved tissues for storing water (their secret to thriving in such naturally arid, punishing conditions) only cacti have areoles, or raised, rounded areas from which spines grow.

If you’re a cactus enthusiast, you’ll get a kick out of this recent arrival: Melocactus matanzanus, a native of northern Cuba (specifically, the Matanzas region, hence its specific Latin epithet). While it’s considered to be critically endangered in the wild, our specimens were raised in cultivation by a private collector in California. Most noted for its cephalium, the hat-like structure on its top, it’s commonly called the dwarf ‘Turk’s Cap’ cactus. They’re considered to be finicky growers, and best suited to cactus enthusiasts who are experienced succulent growers. 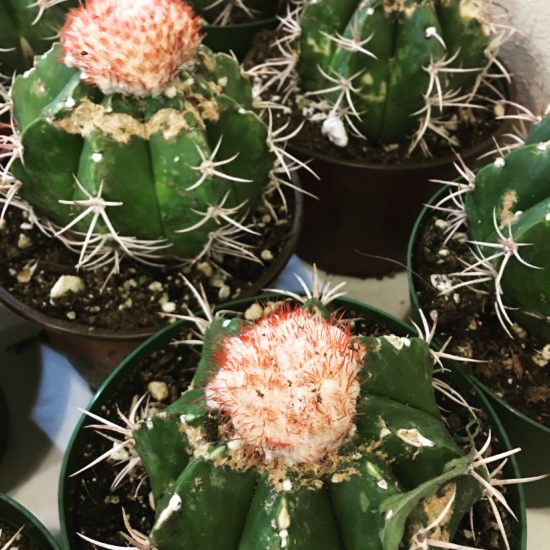 Another great find is ‘Giant Chalk Sticks’ or Dudleya brittonii. It’s unique for its sea-urchin like form, but swoon-worthy for its surreal silvery white coloring. They grow to about 18″ x same, are not hardy here (but reliable down to zone 9) and need perfect drainage. They’re happy in a pot (as long as it drains well) and once established, are happy with only monthly watering. Talk about a specimen plant that thrives on neglect! 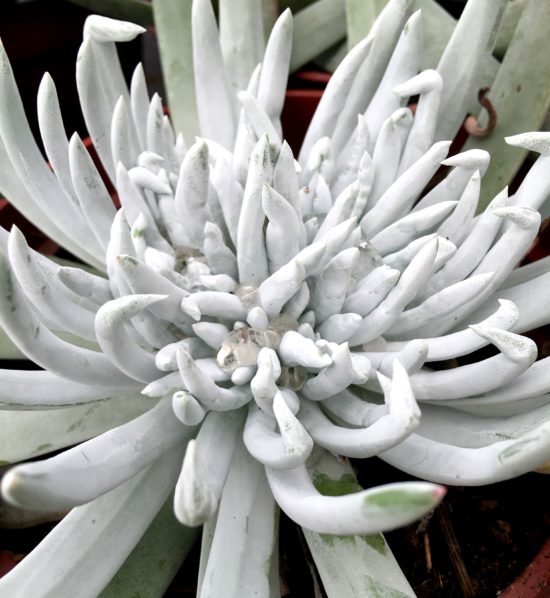 Last, the cute one: Bear Paws (or Kitten Paws) plant: Cotyledon tomentosa. It’s plump, fleshy and softly fuzzy leaves end in little pointy tips that look like teeny claws. With light, they turn reddish-purple, making them stand out distinctly against the apple green foliage. While it can grow into a densely branched shrub in its native South Africa, it’s best kept as a container specimen plant here and is well-suited to a sunny window–just make sure it has perfect drainage. 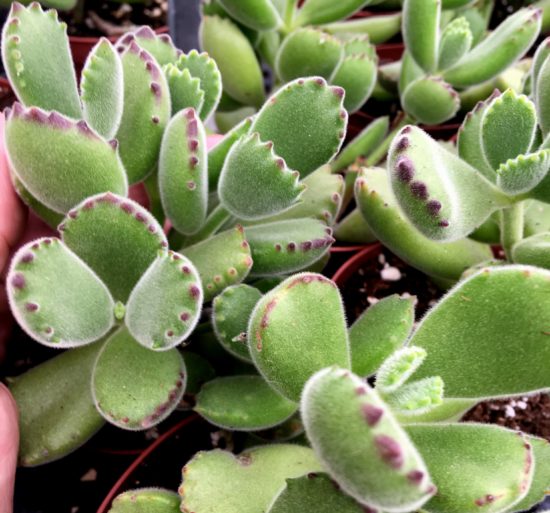 The tiny ‘paws’ of Bear Paws plant are softy fuzzy with reddish tips.

Have you visited ‘succulent world’ in the greenhouse at NHG? It’s more than 4o linear feet of table space with a huge array of species–both cacti and succulents–from tiny 2″ pots up to #1 gallon in size. Whether thorny or smooth, we’ve got your creative succulent projects covered!