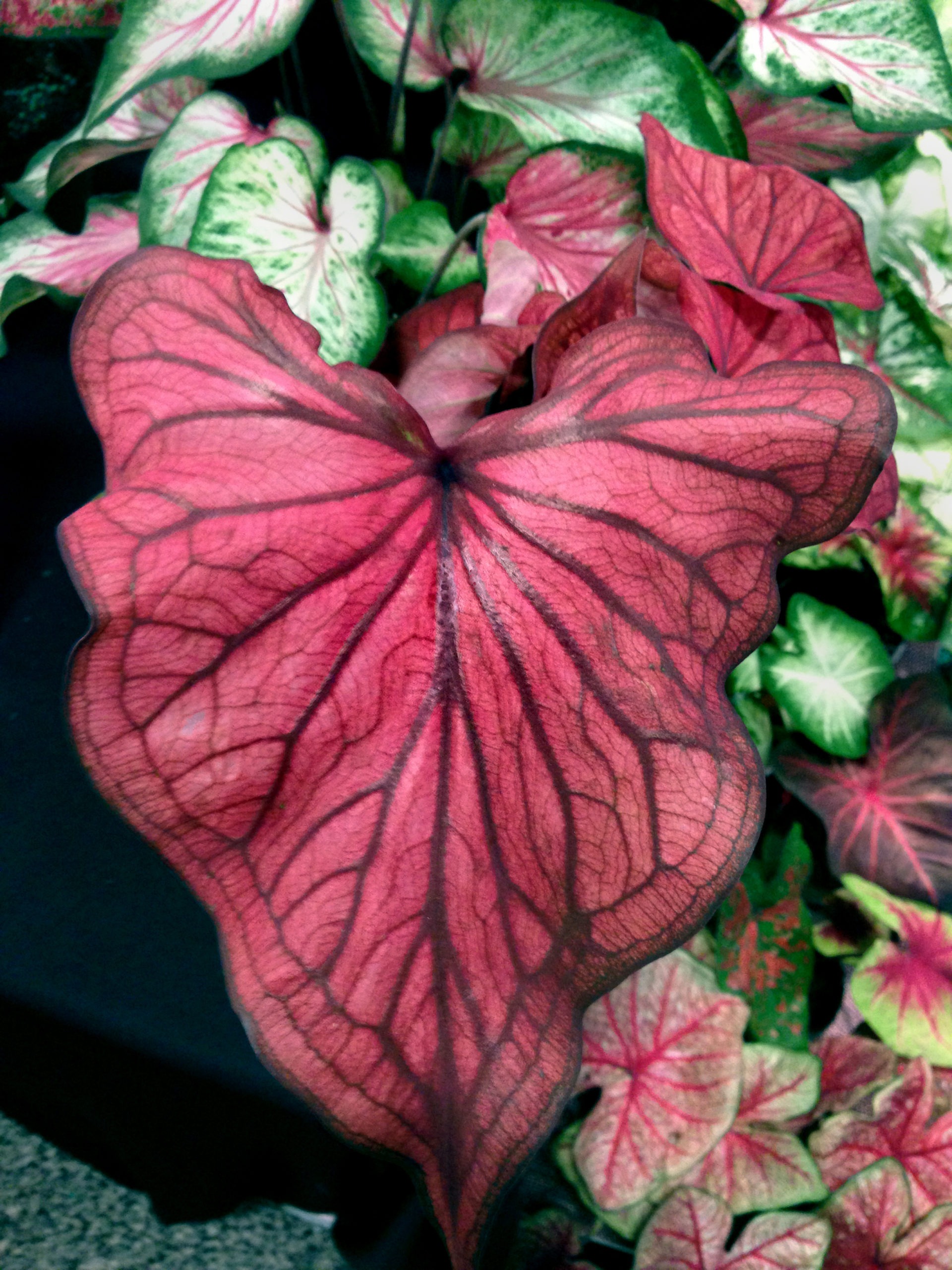 The first caladium described, Caladium bicolor, was a comparatively drab green-and-white plant collected in 1773 in western Brazil. Today, 243 years later, there are over 1,000 named cultivars in colors ranging from white to claret, scarlet, pink and purple.

Caladium is one of 113 genera in the family Araceae, and its relatives include well-known house plants such as Spathiphyllum, Pothos, Aglaonema and Dieffenbachia. Most species of caladiums hail from the Amazon River basin in Brazil, but they can be found throughout tropical rain forests from southern Mexico to Peru.

Caladiums are divided into two types based on the shape of the leaves: “fancy leaf” caladiums have broad, heart-shaped leaves, while “strap leaf” caladiums have narrower, more pointed leaves and are typically a more compact plant overall. Fancy leaf types thrive in bright, indirect light (partial to full shade) and have a high water requirement because the large leaf surfaces lead to faster transpiration. Strap leaf varieties, as a rule of thumb, are more sun tolerant; however, we still don’t recommend planting them where they’ll receive hot afternoon sun. Both types are intolerant of poor drainage, so well-amended soils, raised beds or containers that drain well are ideal.

To de-eye or not to de-eye? Read more about this detail of caladium cultivation here.

We receive our annual assortment of caladium tubers (or ‘bulbs’ as they’re often called) in March; however, we recommend waiting to plant until soils have warmed further—typically around Mother’s day in our area.

New at NHG this year is ‘Desert Sunset,’ a hybrid strap leaf variety with Thai hybrid genetics.  Thai caladiums have their roots in royalty: the Thai royal household had these plants bred over the past century or longer for their own enjoyment, and until relatively recently, western horticulturists were unaware of these spectacular varieties. They’re characterized by brilliantly warm colors with prominent, dark veins in the leaves—and they stand out from all of the old classic varieties. While the true Thai varieties don’t perform well in commercial production, we’ve secured a supply of this unique cross that benefits from the strength and vigor of well-known domestic hybrids.

Learn more about caladium planting and visit NHG soon to choose your favorite varieties and punch up the color in your shady garden, too.

Top Plants That Grow in the Shade for Your Garden

The Easiest Bulbs to Start Indoors